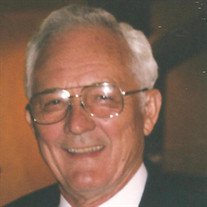 William (Bill) Archibald McGill of Lake Butler, Florida, age 90, passed away on Saturday, December 8. Bill was born in 1928 in Lake Butler to DeWitt Talmage McGill and Ruth Page McGill. He graduated from Union County High School in 1947 and from University of Florida with a Bachelor degree (1951) and Masters degree (1956) in Education. While at UF, he lettered in Track and Cross Country. Bill married Lonita Roberts of Alachua on March 23, 1952 and they lived most of their 66 years of married life in Lake Butler.
Bill was a soldier, teacher, coach, principal, superintendent of schools and historian. He served honorably in the United States Army from 1951 to 1953 and was sent to Germany during the Korean War. He was a teacher, coach and administrator for the state of Florida for 38 years. His passion was coaching track and field where he received Florida Coach of the Year honors while at PK Young and then National Coach of the Year honors while at Lake City Community College. Bill served as Union County High School Principal from 1966 to 1970 and was elected as Superintendent of Schools of Union County in 1976.
Bill and Lonita retired in 1989 and traveled the country and the world. He loved to fish, work in his garden, do wood working, read to school children and mentor his grandchildren. Bill McGill was a huge presence in his community. He loved the Lord and left a spiritual legacy. Bill was an active member of the First Baptist Church of Lake Butler for most of his life. He served as deacon and teacher for many of those years. He volunteered as director of the Marjorie McGill Driggers Historical Museum and in 2008 he wrote "The History of Union County Schools". Bill was also a proud member of the Rotary Club, Masonic Lodge, American Legion and the Quarterback Club. In 2011, he was recognized into the Union County Football Hall of Fame.
Survivors include Bill's wife, Lonita; daughters Lindy Warrick (Bill) of Williamsburg, VA, Jeanne Ternier (Don) of Houston, TX; sons, Jack McGill (Sheri) of Orlando, FL; Tim McGill (Teri) of Augusta, GA; sister, Mary Sue Mosby, of Canton, MS; 9 grandchildren and 12 great-grandchildren. Bill is preceded in death by his brother, Page McGill and his sister Marjorie Driggers. Also left behind are many nieces, nephews, other family members and friends.
Funeral arrangements are with Archer Funeral Home in Lake Butler. Visitation and viewing will be Wednesday, December 12th from 6:00 pm to 8:00 pm at the First Baptist Church of Lake Butler and funeral services will be Thursday, December 13th at 11:00 AM at the First Baptist Church of Lake Butler. Donations can be given in lieu of flowers to the Marjorie McGill Driggers Historical Museum or to The First Baptist Church of Lake Butler and designated for missions.

To order memorial trees or send flowers to the family in memory of William "Bill" Archibald McGill, please visit our flower store.
Send a Sympathy Card