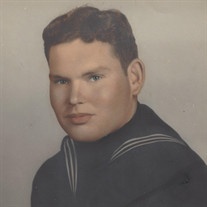 Billy was born in Jacksonville to Thomas C. and Nora Copeland on October 12, 1918. He mar-ried Mildred Dansie on June 3, 1942 in the Salt Lake City, Utah LDS Temple and was married for 73 years. Billy worked as a railroad carman for Seaboard Coastline Rail Road and retired after for 42 years.

He was a lifelong member of The Church of Jesus Christ of Latter-day Saints, helping to estab-lish the Jacksonville Florida Stake and going on to serve in many leadership positions. During his life He wanted to take care of his family and serve is Heavenly Father. He was an example to many, with the help of Mildred, raising 10 children he was able to serve and help build The Church of Jesus Christ of Latter-day Saints in this part of the south. His testimony of the Gos-pel of Jesus Christ has touched many and many have touched him through the years.

He was a veteran of the U.S. Navy where he served as Chief Petty Officer in WWII. The one historical memory of the war was, his ship was part of the invasion of "Iwo Jima" and he saw the original flag being raised.

The family wishes to extend sincere thanks to Lake City Hospice.

To order memorial trees or send flowers to the family in memory of William O Copeland, please visit our flower store.