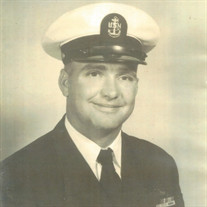 Vernon Roland Barnett
Vernon Roland Barnett (U.S. Navy Ret.), 86, passed away peacefully on December 12, 2016. Vernon was born April 12, 1930 to Lessie  Elliott Barnett and Vivan Reynolds Barnett in Lakeland, FL. He joined his older sister Vernell and the family later moved to Raiford, Fl where they settled and started a farm during the depression.
Vernon attended Union County Schools where he was a star athlete in high school earning a college scholarship for football. Shortly after that, he joined the navy, where he served for 23 yrs., eventually rising to Chief Petty Officer. He served in the Korean theater on board a destroyer and then transferred to the submarine service for which he served for the remainder of his career. His submarine, The Sea Poacher, participated in the blockade during the Cuban Missile Crisis.  After retirement, he worked for 15 years in several shipyards overseas as a ship's electrical contractor, Asst. shipyard's superintendent, and Shipyard's Superintendent until returning home and retiring for good.
He eventually became caregiver to his wife, Peggy, whom he lovingly attended for many years prior to her passing in April of 2012.
He received many commendations for his ability to maintain iron hard discipline and yet have high morale during the most trying and difficult conditions. He was also commended for his mood of congeniality and good humor.
It is this good nature and humor that will be missed most by his friends and family.  Vernon always had a story to tell and his gems of wisdom were entertaining for all with which he associated.
"Dad was warm, caring, and knew every joke he shouldn't tell in mixed company.  He loved his dog-kids as much as his real ones, and could make the hula girl tattoo on his forearm wiggle.  He taught his children math and life skills via weekly family poker games (he never allowed us to win, we had to learn it to earn it).
He provided his children opportunities to meet new people and see new places through his many travels. He loved us and we loved him."
He was predeceased by his wife, Peggy Clarice Dale Barnett, nephew Michael Sapp, and brothers-in-law, Herman Sapp and Eston Jordan. He is survived by his sister, Vernell Sapp, Sister-in-law, Grace Jordan, daughter, Debra Barnett, son Gary Cozatt and Vivian, all of Raiford; son, Randy Cozatt, and Kathy of Dunedin, son, Doug Barnett and Sherry of Lake Butler, grandchildren Kenny White, Cliff Cozatt, Marcus Norton, Doug, Ashley, Ryan, Tyler, & Jill Barnett, great-grandchildren, and many nieces and nephews.
Family will receive visitors on Thursday Evening, Dec. 15, 2016 from 6:00-8:00. Ceremony and Burial will be held at Bushnell Military Cemetery on December 16, 2016 at 1:30 PM. Arrangements are under the care of Archer Funeral Home in Lake Butler.386-496-2008. In lieu of flowers the family ask that you make a donation to the Haven Hospice of your choice in Mr. Barnett's name.

To order memorial trees or send flowers to the family in memory of Vernon Roland Barnett, please visit our flower store.
Send a Sympathy Card