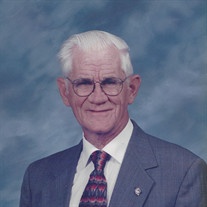 Roscoe Bridges Cruce, 88 of Gainesville passed away peacefully at his residence on October 25, 2016. He was born in Miami, Florida to the late Caleb J. and Vera D. Ellison Cruce. He was preceded in death by his wife Mildred Fipps Cruce.
Mr. Cruce served in the Airforce for over six years before going to work for the Department of Transportation and retiring after 30 years. He was a member of Pine Hill Lodge #9 in Brooker and was a member of the Brooker Baptist Church.
He is survived by his daughters: Wanda (Steve) Sowell, Jean (Monroe) Barnes and Vera (David) Prescott all of Brooker
His sons: Roy Cruce of Brooker and Walter Cruce of Gainesville
His sister: Leone Epstien of New Orleans
12 Grandchildren and several Great Grandchildren

Funeral Services will be on Saturday, October 29, 2016 at 10:00am in the Archer Memorial Chapel with Chaplain Arty Hart officiating, a visitation will be held Friday, October 28, 2016 from 6-8 pm. Burial will follow after the service at Dedan Cemetery in Brooker. Arrangements are under the care of Archer Funeral Home in Lake Butler, Florida. 386-496-2008

To order memorial trees or send flowers to the family in memory of Roscoe B Cruce, please visit our flower store.