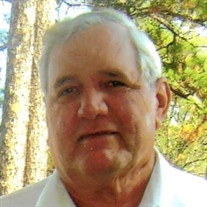 Roger Doyle Richerson, 67 of Lake Butler passed away Sunday October 26, 2014 at his residence. He was born on October 20, 1947 in Dothan, Alabama to the late Hastie and Irene Richerson. He retired from the Florida Department of Transportation. He also enjoyed spending his time fishing. Mr. Richerson is preceded in death by sisters; Hellen Browler and Elsie Hunt; Brothers; Eugene, Thomas and Edward Richerson.

Funeral Services for Mr. Richerson will be held Wednesday October 29, 2014 at 11:00 A.M. at Archer Memorial Chapel with Dr. Rev.Harold Hudson officiating. Burial will take place at William-Tyre Cemetery in Lulu. Family invites friends for visitation Tuesday, October 28, 2014 from 6 to 8 P.M. at Archer Funeral Home, Lake Butler. The arrangements are under the care of Archer Funeral Home, Lake Butler. 386-496-2008

To order memorial trees or send flowers to the family in memory of Roger Richerson, please visit our flower store.