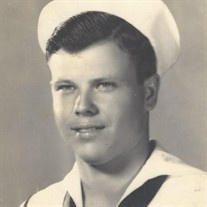 Robert Wiley Williams, 90, of Worthington Springs, FL passed away on April 16, 2017. Robert was born on October 20, 1926 to the late Joseph and Katie Williams. Robert W. Williams proudly served his country in the United States Navy during World War II. Mr. Williams worked as a farmer and was also employed at Clay Electric. He was an active member and good steward of Sardis Baptist Church. Robert enjoyed farming, raising cattle, fishing, and Union County football. Above those things, he loved the Lord. Robert is preceded in death by four brothers; Bryant Williams, John R. Williams, Walter Williams, and Roland Williams. Also by one sister, Jeannie Bell Ahrens.
Mr. Williams leaves his beloved family to cherish his memory. He is survived by his wife Sarahbell, and their two children Andrew Robert Williams and Sarah Ranae Smith. He is survived by two brothers and one sister; Henry J. Williams, Russell Williams, and Angeline Hutson. He is also survived by five grandchildren and twelve great grandchildren.
In lieu of flowers, the family request donations be made to Haven Hospice.

To order memorial trees or send flowers to the family in memory of Robert Wiley Williams, please visit our flower store.