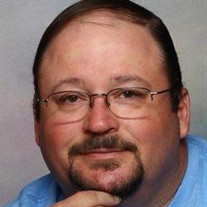 Richard Allen Mayben Jr, AKA "The Supervisor" of Brooker,Florida was born on August 20, 1965 in Gainesville, Florida to Richard Allen Mayben Sr and Mary Ella Green Mayben. Richard "Ricky" was a big-hearted kind man who was a friend to many and a rock to most. He loved driving his big black Chevy aka "The Black Pearl". Ricky enjoyed spending time with his family and friends. He enjoyed cracking jokes, trucking, and watching his good ole Florida Gator football, "Gator up," as he would say. In his last months, he enjoyed spending time with his great nieces; Rosie and Hazel. Richard had been ill for many years. He entered the hospital for the last time in the first week of the New Year. On the afternoon of January 3, 2018, Ricky decided it was time to return home to his Heavenly Father and his parents, while he was at North Florida Regional in Gainesville, Florida. Richard is survived by his three brothers and their wives; Gregory (Kammie), Russell (Sheri), and Harold Mayben. He is survived by his sister, Mattie Foster May. As well as his four nieces, their husbands, and significant others; Elizabeth Mayben Swilley (Taylor), Taylor Mayben (Dalton Cassels), Sadie Mayben (Timothy Turner Jr), and Abbygail Mayben. He is also survived by his three great nieces; Aubrey Swilley, Rosaleigh Hatfield Mayben, and Hazel Grace Turner. He is preceded in death by one great niece, Faith Swilley. Richard is survived by his five step children; Marrisa Jones, Amberlyn Squires, Krystal Geraghty, Kenndal Dickson, and Kyler Thorton. He is survived by his life long friend, Kymberly Smith. Long time girlfriend, Vickie Starling. Two cousins; Isabell Foster and Julia Farmer.
Gator up!

To order memorial trees or send flowers to the family in memory of Richard Allen Mayben Jr, please visit our flower store.
Send a Sympathy Card