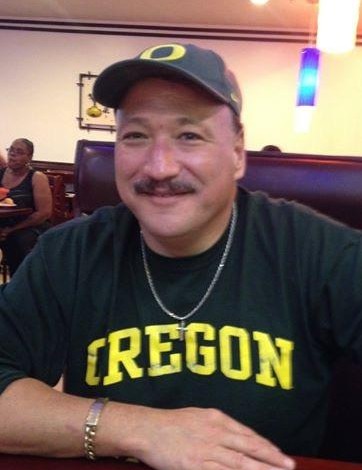 Raymond Victor Wolf, 53, of Lake Butler, died suddenly from a tragic car accident on Monday December 16th, 2019. A veteran of the United States Army, he proudly served his country in the 24th Infantry Division.

Ray was born on January 3rd, 1966 to Victor Wolf and Kathy Kim in Portland, Oregon. He was a huge Oregon Ducks fan. In 1985, he joined the armed forces and was assigned as an artillery surveyor. He was wounded in 1988 and was discharged with full honors. He went on to become an ordained minister and received a degree in Pastoral Studies in Theology and Ministry in May 1997.

Ray was an affectionate husband and a loving father. He married his soulmate Sheri Creamer in Gatlinburg, Tennessee on May 30, 2015, and they have been inseparable since. He was a happy go lucky man, who rarely stressed about anything. On most days you could find him singing loudly for all to hear. He was considerate, kind, and always willing to help in any way he could.

A viewing and funeral services will take place on Friday December 20th, 2019 at the Lake City Church of God, 173 SE Ermine Ave, Lake City, FL 32025. The viewing at 10am, and the funeral following at 11am. Burial with full honors, will take place Monday, December 23rd at Veterans National Cemetery at 10:00am. 4083 Lannie Rd., Jacksonville, FL 32218. Funeral arrangements are provided by Archer Funeral Home. Memorial donations can me made to Archer Funeral Home to help with expenses.

To order memorial trees or send flowers to the family in memory of Raymond Victor Wolf, please visit our flower store.
Send a Sympathy Card