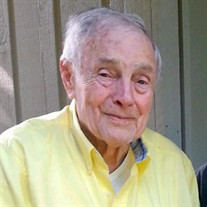 Paul B. Emery, Jr.
August 17, 1929 - August 22, 2017
Paul Emery was born in Blowing Rock, North Carolina, and he moved as a young boy with his family to Alachua, Florida.
He graduated Alachua High School in 1947, and after graduation he joined the U.S. Air Force and was stationed in Germany most of his military career.
After his service in the Air Force he attended the University of Florida then married his wife of 51 years, Yvonne Harrell Emery.
He was a pioneer in the cattle industry, serving as the first president of the Florida Limousin Association. He owned and operated Emery Limousin where he was one of the first to bring these highly muscled beef cattle east of the Mississippi River. He moved to Gadsden County, FL in 1974 where he continued his career in cattle and expanded his business by opening a meat processing plant (Emery Meats), which he owned for many years.
Upon leaving Quincy, FL he returned to the New River Community of Bradford County, FL.
His lifelong dream was to own a summer home back in the Southern Appalachian Mountains where he was born. He fulfilled his dream buying a home in Avery County, NC where he and Yvonne would spend many summers. He enjoyed spending his time there tracing his family roots. He was able to trace his heritage all the way back to Ireland in the 1600's.
Paul is predeceased by his wife, Yvonne; his brother, Carl; his sister, Helen; and his parents, Paul Sr. and Helen Coffey Emery.
He is survived by his three sons Mike (Alice Kaye) Emery of Brooker, FL, Dwight Emery, and Greg (Linda) Emery of Greenville, SC; grandchildren Ryan Emery, Austin (Carissa) Emery, Markie (Kyle) Hunter, Amy (Randy) Landwerlen, Logan Emery, Madison MacLean, and Cameron Emery; and two great grandchildren Everett and Clay Emery.
Paul was a devoted Christian and a member of the New River Baptist Church.
The Emery family would like to extend a special thank you to the staff of Serenity Hall at the Lake City VA Medical Center. In lieu of flowers the family requests donations be made to New River Baptist Church; 16703 S.W. 144th Avenue Brooker, FL 32622.

To order memorial trees or send flowers to the family in memory of Paul Belmont Emery Jr, please visit our flower store.
Send a Sympathy Card