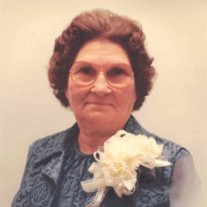 Ouida Mae Bray Everage, 94, passed away Thursday, March 13, 2014 in Starke, Florida. Ouida was born in Brantley, Alabama, the daughter of James Lafayette and Lena Bell Capps Bray. She married and moved to Dade County, Florida where she began her first job in business with the F.W. Woolworth Company and soon became an office manager. Ouida was motivated to work in business and throughout her life owned and operated markets, apartments, and several grocery stores. In 1975, Ouida moved from Homestead to Lake Butler to live close to her daughters and continued her interest in business. In retirement, she loved to travel, read, and work on landscape puzzles. She traveled extensively throughout the United States, Asia, Europe and the Holy Land. She was a member of the First United Methodist Church of Lake Butler and was an active member of a local group known as the "Golden Agers" for many years.
Ouida is survived by a daughter, Rose Marie Wiggs-Tyre and her husband Jesse Tyre of Lake Butler, a sister, Arvela Tate of Homestead and a brother, James Bray of Lake City, six grandchildren, Renae Allen, Dianne Hannon, Steven and Kevin Johnson and Michael and Lisa Everage, eleven great-grandchildren, 4 great-great grandchildren and a host of nieces and nephews she dearly loved. She was preceded in death by her husband Willie Lee Everage, a son, Sanford "Sonny" Everage, and a daughter, Janice Johnson.

To order memorial trees or send flowers to the family in memory of Ouida Mae Everage, please visit our flower store.
Send a Sympathy Card