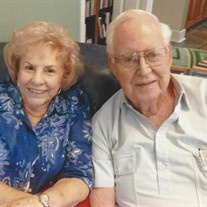 Born in Minneapolis, MN, the son of Oliver Harold and Mildred Cosler Stephenson, he was a lifelong resident of Lake Butler, FL. After graduating from high school, he served two years in the United States Navy during World War ll, and six years in the Air Force during the Korean War. Upon completing his military service, he attended the University of Minnesota's College of Engineering.

Upon completion of his education and joining the work force, he had an opportunity to move to Tampa, Fl where he met his wife Elida. After marrying, they moved to Lake Butler, FL in 1959 and began construction of their first apparel manufacturing plant known as Lake Butler Apparel Company. After initially employing 120 people, that number quickly grew to 750 employees in three different locations, and his eventual retirement in 1995 after 35 years in business.

Acting on his belief, that when you have a good head and a good heart, you have a powerful combination, he served as a Union County School Board Member for eight years, and proudly served many years on the Foundation Board of Directors, and the Board of Trustees for Florida Gateway College. He was also the founding member, first president, and lifetime member of the Lake Butler Rotary Club.

His hobbies included fishing and fishing... and did I mention fishing, and his "best catch" was his wife. His fishing trips with family and longtime friends took him to places as far away as Great Bear Lake, in the Arctic Circle, and as close as Rodman Reservoir.

God broke our hearts to prove to us He only takes the best. He will be enormously missed, and lovingly remembered, for the unconditional love and support for his family. His wake will be held Tuesday, Nov. 29th from 6pm-8pm at First Christian Church, Lake Butler FL and his funeral services will also be held at First Christian Church on Wednesday, Nov. 30th at 1:30 pm. Ministers Art Petersen and Shane Collins will officiate the service. Arrangements are under the care of Archer Funeral Home in Lake Butler. 386-496-2008.

To order memorial trees or send flowers to the family in memory of Norman Harold Stephenson, please visit our flower store.