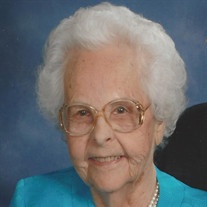 LAKE BUTLER - Alethea Dukes Clyatt, 96, of Lake Butler went to be with the Lord on Thursday, January 14, 2016, at Baya Point Nursing and Rehab Center in Lake City. Mrs. Clyatt was born on October 26, 1919, the seventh child of the late Samuel and Viola (Douglas) Dukes. She was a lifelong resident of Union County. She married the love of her life, Kenneth Mobley Clyatt on May 21, 1937, and together, they had four children and were blessed with 77 years of marriage.
Mrs. Clyatt was part of Harmony Free Will Baptist Church becoming a member with her husband in 1938. Mrs. Clyatt was a homemaker and raised all four of her children before working outside the home. She was employed by and retired from Sunland (currently Tacachale). She was a loving and devoted wife and enjoyed cooking, sewing, singing, gardening, fishing, and traveling with her husband, especially during their retirement years. She was a loving and devoted wife, mother, grandmother, and friend. She adored her grandchildren, and loved spending time with them.
Mrs. Clyatt was preceded in death by her husband (Kenneth Mobley Clyatt), daughter (Verrell Clyatt Martin), her youngest son (Elmo Kerwin Clyatt), her parents, four brother (Earl, Desmond, Cyril, and Garnet Dukes), two sisters (Vera Hewitt and Avis Cox) , her daughter-in-law (Irma Steiner Clyatt), and her grandson (Charles William "Chuck" Martin).
Mrs. Clyatt is survived by two sons, Kenneth Melaine "Red" Clyatt and Larry Dukes (Peggy) Clyatt, both of Lake Butler, 11 grandchildren, 26 great-grandchildren, and 13 great-great-grandchildren.
A celebration of her life will be conducted on Sunday, January 17, 2016 at Harmony Free Will Baptist Church in Lake Butler, beginning with visitation at 1:30pm followed by the service at 2:30pm. The service will be officiated by her son, Larry Dukes Clyatt.
Arrangements are through Archer Funeral Home of Lake Butler, 386-496-2008.

To order memorial trees or send flowers to the family in memory of Mrs Alethea Dukes Clyatt, please visit our flower store.
Send a Sympathy Card