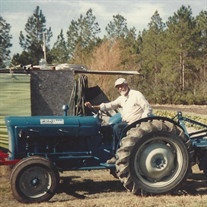 Wilber Vernor Knight 92, USN Retired, Of Olustee, Florida passed away on January 23, 2017. Mr. Knight was born in Tallassee, Alabama on May 18, 1924 to the late George Knight and Clara Thomaston Knight.
Mr. Knight was a member of the United States Navy for 20 years before retiring. He then went to work as a Lineman for the Jacksonville Beach Electric Department for 16 years, at his retirement he then moved to Olustee-Baker County. His hobbies included Farming and Hunting, He was a member of the Piney Bay hunting Club.
He is survived by his wife Grace Spence Knight, His Children John and Susan and several grandchildren.
Services for Mr. Knight will be held at the Jacksonville National Cemetery on Friday, January 27, 2017 at 11:30 AM. A visitation will be held on Thursday July 26, 2017 from 4-6pm at Archer Funeral home. Arrangements are under the care of Archer Funeral Home in Lake Butler. 386-496-2008

To order memorial trees or send flowers to the family in memory of Mr. Wilber V Knight, please visit our flower store.