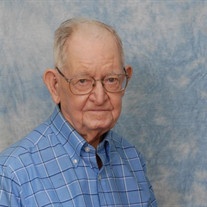 Drew Randolph Hendricks was born in Lake Butler, Florida on November 18, 1924 and was surrounded by family when he passed away peacefully on September 3, 2016 at North Florida Regional Hospital.

Drew enlisted in the Navy in 1943 and was first stationed in Key West, Florida where he met his future wife, "Josie". He then served on the USS San Clemente in the Pacific Ocean during WWII. After discharge from the Navy in 1946, he and Josie married and lived in Miami, Florida where he worked at Greyhound for 36 years. Using the GI bill, he attended vocational school in Miami and learned TV repair.

After he retired from Greyhound, he and Josie moved to Lake Butler where he built his home on the family property. He was a member of the Lake Butler Church of Christ having been baptized at the age of 69. Drew loved the land, having inherited that love from his father, Butler Hendricks. He could be found working in his garden, riding around his property in the golf cart, sitting in his chair in the garage watching the birds feeding and the traffic go by as he waited for the mail person or visitors. He was never a person that openly displayed his feelings but everyone knew he loved them and that he loved his country.

He was preceded in death by his wife Josie, his parents Butler and Ollie, 3 brothers; John, James, and Harold Hendricks; and 2 sisters Marie Brooks and Evelyn Paulk.

He is survived by six brothers and their wives: Bryan & Jeanette, Joe & Elaine, David and Ann, Herman & Pam, Vernon & Janet, Donald and Lois, and many nieces and nephews who loved him and he loved just "a little bit" as he would tell them and they would tell him.

Our hearts our broken that he has left us but we know he is at peace with God and that we will see him again.

Funeral services will be held at 11 am on Wednesday, September 7, 2016 at the Lake Butler Church of Christ with visitation at 10am prior to the funeral.

To order memorial trees or send flowers to the family in memory of Mr. Drew Randolph Hendricks, please visit our flower store.