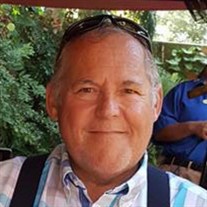 Mr. Mark Marvin Manning, age 62, of Hampton, Florida, passed away on December 22, 2018, at UF Health Shands Hospital in Gainesville, Florida. Mark was born on December 15, 1956, in Tecumseh, Michigan to Marvin Roy Manning and the late Edna Margaret Belanger Manning. Mark grew up in Michigan and worked as a fabricator in the automotive industry. He loved to piddle with projects, wood working, and remodeling his house. His wife of 27 years, Ann Marie Manning, passed away in 2007, and Mark moved to Florida from Belleville, MI, after 27 years, to be with family. While in Florida, he reunited with his high school sweetheart, Pat Starling, and she has been with him ever since. He was a loving husband, father, grandfather, brother, and friend and he will be deeply missed. Mark is preceded in death by his wife, Ann Marie Manning; his mother, Edna Margaret Manning; and brothers, Robert and James Michael Manning.
Mark is survived by his spouse, Pat of Hampton, FL; daughter, Katie (Paul) Haskins of Flint, MI; sons, Corey Manning of Foristell, MO, Greg (Farah) Swan of Hampton, FL, and Mike (Christina) Swan of Starke, FL; grandchildren, Dominic, Angelina, Jarid, Jakob, Noah, Brandin, Gavin, Halle, C.R., Colton, and Codey; siblings, Mary (Mike) Stokeley of Raiford, FL, Dennis Manning of Hampton, FL, and Margaret (Rick) Tagala of Orange City, FL; numerous nieces, nephews, and cousins also survive. Arrangements are under the care and direction of ARCHER FUNERAL HOME of Lake Butler, Florida. 386-496-2008

To order memorial trees or send flowers to the family in memory of Mark Marvin Manning, please visit our flower store.