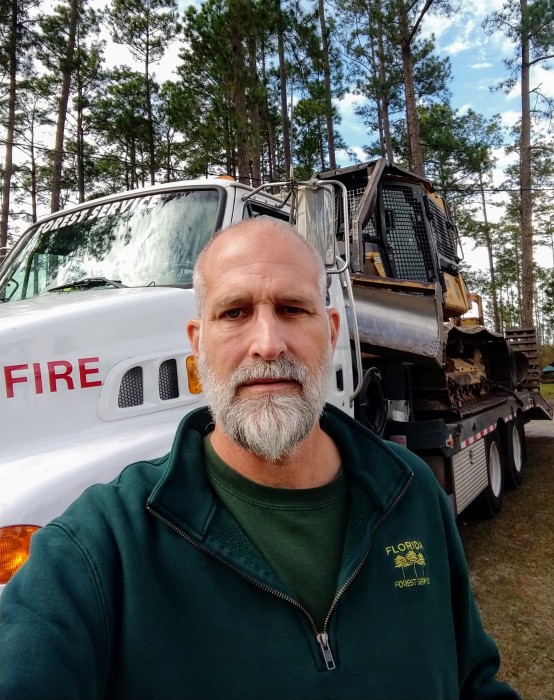 Mr. Mark Harrison Chapman “Chappy”, age 51, of Lake Butler, FL, passed away January 24, 2020. Mark was born on June 23, 1968, in Rutherfordton, NC to Edwin Chapman and Margaret Harrison. Out of high school, Mark enlisted in the United States Navy and he would serve 13 years as a Seabee. In 2000, Mark transferred to the United States Air Force and served another 14 years. In 2014, Mark retired from the Air Force as a Master Sergeant with the Red Horse 202 division out of Camp Blanding. In 1999, Mark started working for the Florida Forestry Service and that brought him to Lake Butler. In March of 2000, while at Spires IGA, he met Adrian Williams. In July of that same year, they married. They enjoyed animals, especially their blood hounds and cows. Mark also enjoyed hunting predatory animals like hogs and coyotes.

Mark is survived by his wife of nearly 20 years, Adrian Williams Chapman of Lake Butler, FL; his mother and father in law, Russell and Mary Williams of Lake Butler, FL; mother, Margaret Harrison Hawkins and sister, Kathy Major and husband all of Anderson, SC; his father, Edwin Chapman and wife of Burlington, NC; step sister, Morgan Danford and husband of Burlington, NC; uncles, Rob Harrison of RI and Don Harrison of Columbia, SC; aunt, Linda Hagan of Society Hill, SC; and their kids Doizer and Denjin.

A funeral service to honor Mark’s life will be held on Friday, January 31, at 11:00 am at the First Christian Church in Lake Butler. There will be a viewing beginning 10:00 am at the church. His interment will follow at Elzey Chapel Cemetery where military honors will be presented. Services will be officiated by Bro. Art Peterson. Arrangements are under the care of Archer Funeral Home. 386-496-2008. www.archerfuneralhome.com

To order memorial trees or send flowers to the family in memory of Mark "Chappy" Harrison Chapman, please visit our flower store.
Send a Sympathy Card