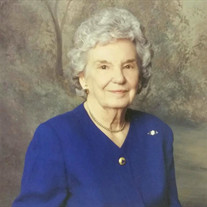 Marjorie McGill Driggers, age 96, passed away on Wednesday, September 5, 2018, in Lake Butler, Florida. Marjorie was born in Lake Butler on September 22, 1921, to DeWitt Talmage McGill and Ruth Page McGill. She was a 1938 graduate of Union County High School and attended Florida State College for Women. On August 31, 1941, she married her high school sweetheart, Robert Aaron Driggers, and together, they built their home on the banks of the beautiful lake, where they celebrated sixty happy years.
Marjorie owned and operated Marjorie's Flower Shop where she shared her creative and talented gifts with the community. Later in retirement, she and Robert enjoyed their motor home as active members of the New River Ramblers Club.
Marjorie was a lifelong resident of Lake Butler and was an active and contributing member of the following organizations: Past President of the Lake Butler Women's Club, Past President of the PTA, Pink Lady at the Lake Butler Hospital, 2008 Farm Bureau City Family of the Year, major supporter of the Union County Library, Historian of Union County, and published The History of Union County.  She was a member of the Union County Historical Society and the local museum is named in her honor. Marjorie belonged to the Lake Butler Chapter #40 Order of the Eastern Star and served as Grand Adah 1954-55; She joined the Lake Butler United Methodist Church where her husband had been a lifelong member and she was a dedicated member, even serving on the Commission of Archives and History of the Florida Conference of the United Methodist Church. She returned to Lake Butler First Baptist Church where she had been baptized in childhood when LB United Methodist closed. She was a charter member of the Gainesville Dolling's Club, Gainesville Chapter Daughters of the American Revolution, and a board member of the North Florida Area Agency on Aging.
She was preceded in death by the love of her life, Robert Aaron Driggers; brother Este Page McGill; sons-in-law Clifford F. Dance and John H. Lewis. Survivors include daughters, Shirley Ruth Dance, Winona, MS; Sara Sue Lewis, Pensacola Beach, FL and LTC (Ret) Robert A. (Bob) Driggers, Jr (Janet), Madison, AL; brother William A. McGill (Lonita), Lake Butler and sister, Mary Sue Mosby, Canton, MS; 7 grandchildren; Clifford Dance, III Robert Paul Dance, Caroline Ruth Caldwell, Rebecca Lynn Dorton, Alicia Marjorie Driggers, Erin Eileen Douglas, and Robert Aaron Driggers, III.15 great-grandchildren, and 1 great-great grandchild. Also left behind are many nieces, nephews, other family members and friends.

To order memorial trees or send flowers to the family in memory of Marjorie McGill Driggers, please visit our flower store.
Send a Sympathy Card