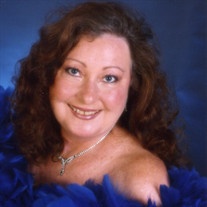 Lujune Rush Southerland, 56 of Lake Butler passed away Monday, June 2, 2014 at ET York Haven Hospice in Gainesville after an extended illness, surrounded by her family. Mrs. Southerland was born on June 15, 1957 in Ocala to the late James Rush, Sr. and Velva Gay Rush. She was employed with medical records at Shands in Gainesville for many years. She is survived by her loving husband of 35 years John Earl Southerland, Jr; Daughter: Jennifer Dawn Southerland; Granddaughter: Savannah Dawn Southerland; Brother: James Rush, Jr.; Two sisters: Penni Williams (Anthony) and Teresa McGill

Funeral Services for Mrs. Southerland will be held Friday, June 6, 2014 at 11:00 a.m. in the chapel of Archer Funeral Home, with Rev. Steve Hutchinson officiating. Burial will be at New Zion Cemetery following the services. Family invites friends for visitation Thursday, June 5, 2014 from 6 to 8pm at the funeral home. Archer Funeral Home is in charge of the arrangements. 386-496-2008

To order memorial trees or send flowers to the family in memory of Lujune Rush Southerland, please visit our flower store.