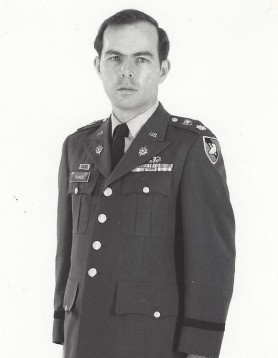 Lt. Colonel Donald Lamar Dukes, age 81, passed away on February 20, 2019, at his residence. A celebration of life for Lt. Colonel Dukes will be held on Tuesday, February 26, 2019, at Sardis Baptist Church in Worthington Springs at 3pm with Pastor Tim Rose officiating. The family will receive visitors beginning at 2pm (one hour prior to service). His Interment will be at North Pleasant Grove Cemetery in Alachua, Florida.

The family has written separate obituaries to honor their brother, husband and father.

From his brother and sister, Wayne Dukes and Wanda Godwin:

Lt. Colonel (U.S. Army, retired) Donald Lamar Dukes, died peacefully at this home in Worthington Springs, Florida on February 20, 2019, at 11:30pm, succumbing to cancer contracted as a result of exposure to agent orange in the jungles of Vietnam as an intelligence officer on covert assignments with the Army Rangers.

He was preceded in death by his parents Desmond F. Dukes and Ouida Mae Holder Dukes, and by a brother Duvigne Dukes. Don was born October 11, 1937, at his parent’s home in Orange Lake, Florida and delivered by his uncle, Dr. I.A. Dailey (the “real” Micanopy doctor).

Don attended all 12 years at Reddick Schools, graduating in 1955. He then attended the University of Florida where he graduated with a B.S. and M.S. in Education. While at UF he was a saxophone player with extraordinaire with the Gator Variety Band and served as Director of the UF ROTC Band.

While serving in the Army, Don also taught for several years at West Point. After retirement from the Army, he was recruited as a manager for The MITRE Corporation (Massachusetts Institute of Technology Research Engineering) at McDill Air Force Base, Tampa, Florida, retiring from there in the early 2000’s then moving to Worthington Springs where he continued as a consultant with MITRE for 10 years.

As an Army officer Don received numerous awards, however, his most cherished was the award he received for bravery during Alaska’s Good Friday Earthquake of 1964. During the earthquake event, the Alaska Nike Nuclear Missile site Don was in charge of sustained severe damage. Armed missiles, in launch position, tumbled and rolled freely across the ground. Facing imminent danger to his life, he refused to leave his post and successfully disarmed the missiles. A 50 year (anniversary) parade honoring him and his men was held in Anchorage, attended by the Governor and high ranking military officials. Other awards include a plaque from the DOD signed by President Bush in 1993 for helping develop a form of new communication used in Desert Storm for ground troops. It was undetectable - no radio waves. Time magazine called it SINCGARS.

Throughout most of his life, even into his later years, Don loved to play music and was recognized as an exceptionally talented musician. In 1954, as a high school senior he took his high school jazz combo, with his brother on trumpet, and his saxophone and performed on Jacksonville’s Virginia Adder live TV variety show. In 1954-1955 his Gospel quartet, consisting of his brother and two Reddick high school seniors, had a weekly Saturday morning live radio show on Ocala’s WMOP radio. In the late 50’s while at UF, Don’s jazz combo, The Carrtunes, were recognized as one of America’s top college jazz combos and invited to perform at a musical celebration in Havana, Cuba. Also, while in Cuba, he met Les Brown and performed with his world renowned band. Throughout his life he remained a fan of the “big band” sound. As a teen, he was a good enough saxophonist to play professionally and to pay for this UF education. While in Vietnam he served as choir director for Billy Graham’s Vietnam tour. Also while living in Tampa, throughout the 1990’s, Don regularly performed saxophone solos for his church.

No obituary for Don would be complete without mentioning his deep love for Christ Jesus. Don had a profound knowledge of the Bible and taught Sunday School classes for many years. Everybody that knew or came into contact with Don came away knowing exactly where he stood with the Lord.

From his wife, Rita:

Don L. Dukes, my husband of 30 years, was a very special man in so many ways. He was especially caring, loving, gentle and kind to me and all who knew him. He would have given his right arm to you if he felt it would help. He was in fact generous to a fault.

I felt he was very much like our Lord Jesus Christ whom he was very close to. He read the Bible always and patterned his life as close to the “Word” as he could. He taught Sunday School for many years and especially enjoyed the Old Testament. He loved to challenge folks on the Scriptures.

Don spent 55 years working for our Government and he was SO VERY PROUD to serve his country. The world will NEVER know ALL that Col. Donald L Dukes has done for our country. One memory I have is the story he shared with me about the Alaska earthquake. When it hit everyone who had been trained to disarm the now tipped over and gyrating missiles got in their trucks and left as fast as they could. Col. Dukes, he was commander of the site, picked up the book of instructions with one hand and put the other hand in the small hole on each of 36 missiles and proceeded to disarm each of them site unseen. Thank you and God bless you for a job well done.

My darling husband went home to his Heavenly Father on February 20th at 11:30pm. He went from mine and Amy’s (our daughter) arms into the arms of our Lord. Here Father is the hardest fighter I’ve ever known and a very special Soldier for your Army. Goodbye by darling I’ll love you forever.

From his daughter, Amy:

After a long brave fight, my daddy, Lt. Col. Donald Dukes passed away at home in comfort and peace in the arms of myself and my mother, Rita A. Dukes. We held him tightly as he took his last breath here on earth to go take his first breath with our Lord in Heaven.

There is so much to say about him, so much goodness wrapped up in a beautifully God made package.

He always called me his sweetheart and there weren’t too many days that went by that he did not tell me how much he loved me, how proud he was of me and how thankful he was for me.

Dad always showed so much courage and strength in life. I’m so grateful for the time God blessed me with allowing me to learn, love and grow in his example. I pray the pieces of him in me shine through and spread their light on.

Although we are grieving the loss of his physical presence, we are celebrating and honoring his life.  I thank you God for lending us one of your truest angels here on earth for so long. He has now received his newest orders for his final mission. We salute you daddy! Forever in our hearts.

To order memorial trees or send flowers to the family in memory of Lt. Colonel Donald Lamar Dukes, please visit our flower store.