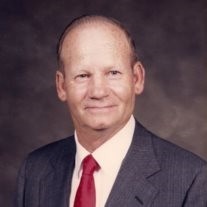 Mr. LeRoy Stalvey, 83, of Lake Butler died Friday evening, February 14, 2014 at Haven Hospice in Lake City after an extended illness. Mr. Stalvey was bom October 30,1930, to Perry Stalvey and Lillie Lee McMikell Stalvey. When he was 4 months old, his father died and his mother later married Marvin Tyre, Sr., who accepted the role of father. Mr. Stalvey has lived in Lake Butler the past 42 years. He proudly served his country in both the U. S. Army and the Coast Guard. Following his military service, Mr. Stalvey worked as an Officer for a State Road Prison in Columbia County, FL, Truck Driver for the Copeland Company, a Farmer, a Scrap Metal Business owner, and the Union County School Board. He retired from the School Board in 1994. For the past 25 years and up until his death, Mr. Stalvey proudly served as City Commissioner for the City of Lake Butler, FL, serving as Mayor for eight of those years. He received recognition twice for this service by the Florida League of Cities. Mr. Stalvey stated numerous times that he was both proud and honored to have been allowed to serve the citizens of Lake Butler. He served on the Federal Housing Board for two and one-half years. Mr. Stalvey was a member of the following organizations: a Charter Member of the Union County Library Board, serving on Die Board for seven years; he was a lifetime member of the Lake Butler V.F.W. Post 10082, and was a former Post Commander. He was a member of Lake Butler Church of God. Mr. Stalvey was a man that loved his family, and enjoyed family gatherings. He also enjoyed gardening and had some of the most beautiful flower gardens.
Mr. Stalvey had five children from a previous marriage that he was proud of, and willingly accepted the role as a father to four daughters, two grandchildren and one great granddaughter from his wife's previous marriage.
Mr. Stalvey was preceded in death by his parents: Perry Stalvey, Lillie Lee McMikell Tyre and Marvin Tyre, Sr., three sisters: Doris Shipp, Mary Lou Feagle, Sylvia Brantley, four brothers: James Tyre, Marvin Tyre, Jr., Johnny Mack Tyre, and Hubeart Tyre, Daughter Teresa Hart, and three grandchildren, Justin and Staci Eaves, and Faith Gray.
Mr. Stalvey is survived by his loving wife of 42 years, Shirley A. Stalvey of Lake Butler, a great-granddaughter, Anistin Arvin that lived with him and his wife, two sons and six daughters: Roy P. (Cherri) Stalvey of Indiana, Timothy Stalvey of Lake City, Anneliese (Rickey) Stafford of Glen St. Mary, Deborah Dean of Jacksonville, Denise (Victor) Fundora of Lake City, Merrell (Evon) Colchiski of Ocala, Deborah Hart of Ocala, and Shawn (Keith) Gray of Texas, 20 grandchildren and 14 great grandchildren, three sisters: Irita (Roger) Richerson of Lake Butler, Dorothy M. (Dick) Nolan of Lake City; Evylena Fipps of Lake City and Several nieces, nephews, dear friends and co-workers in Union County, FL.
The visitation with family will be Tuesday, February 18, 2014 from 6-8:00 PM at Archer Funeral Home. The funeral will be held Wednesday, February 19, 2014 at 11:00 AM. at the Lake Butler Church of God, with Brother Lemuel Lane and Brother Danny Foreaker (from Trinity Baptist Church) officiating.. Interment will be at Dekle Cemetery. Archer Funeral Home, Inc. is in charge of the arrangements, 386-496-2008.

To order memorial trees or send flowers to the family in memory of Leroy Stalvey, please visit our flower store.
Send a Sympathy Card