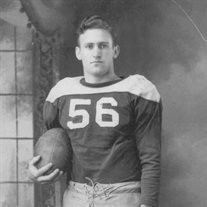 Keystone Heights; February 15, 2014; Leo Kenneth Turner (Kenny) Sr. 93, of Keystone Heights, passed away Feb. 15, 2014, at the North Florida Regional Medical Center in Gainesville. He was born in the New River section of Bradford County. He was the son of the late Roan and Phyla Renfroe Turner, where he lived until he graduated, and joined the U. S. Army. He was also preceded in death by his loving wife Martha Collins Turner. He was a Fireman in Sanford, Florida until he retired as Captain after 35 years of service. He was a Mason with Lodge #52 Lake Butler,He was a member of the Singles Club in Lake Butler, and the Keystone Heights Social Club. He was also preceded in death by one brother and 2 sisters.


He is survived by his companion of 23 years; Delores Wynn of Keystone Heights
His Daughter; Mary Jean Henson and husband James of Albany, Ga
His son Leo Kenneth Turner, Jr. and wife Karen of Crestview, there are 4 Grandchildren; Laura and Derek Turner; James Henson Jennifer Williams, and 3 Great-grandchildren
His Brother; Wilbur Turner of DeBury

Funeral services will be held Tuesday, February 18, 2014 morning at 11:00am in the chapel of Archer Funeral Home of Lake Butler, with Bro. Art Peterson officiating, burial will follow in Orange Springs Cemetery. Family will receive friends at the funeral home Monday, February 17, 2014 evening from 6 to 8 p.m. Archer Funeral Home is in charge of arrangements. 386-496-2008

To order memorial trees or send flowers to the family in memory of Leo Kenneth Turner, please visit our flower store.
Send a Sympathy Card