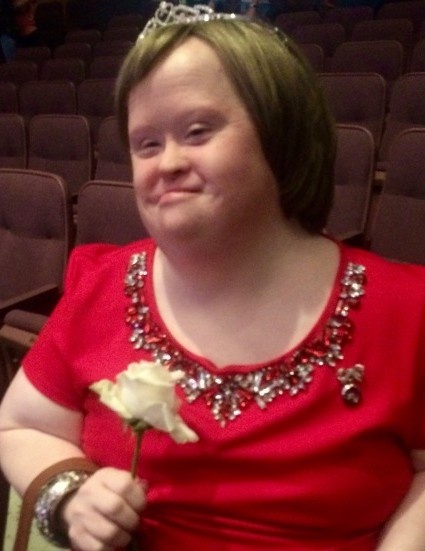 With her arm extended for a handshake, she would introduce herself saying, I’m Kristin Akers, I’m 42 (or whatever age she happened to be) my birthday is February 14, and then she would proceed to name her brothers and sisters.
She was all about making friends and sharing family.

Kristin Marie  was born on Valentine’s Day in 1977 to Jeraline and John Akers,Jr. The youngest of 7 children, she immediately became everybody’s sweetheart. She lived her life to the fullest thanks to parents and family that never allowed her to be considered “disabled” by having Down Syndrome. Her birthday celebrations became community events.
She graduated from Union County High in 1997. She was a member of The Church of Jesus Christ of Latter-Day Saints where she progressed through the youth Sunday programs, completed Girl’s Camp program, shared testimony, gave prayers and was Relief Society song leader. She loved parades and rode many homecoming and Christmas floats or golf carts.
She has gone to all 10 yrs. of her Celebration of Abilities Prom and crowned Queen, been in a fashion show, swam with dolphins, loved bowling, and was known as The UNO Queen. She was good at trash talking her opponents! She was a fixture at football, volleyball, and baseball games cheering on her nieces and nephews and sometimes even harassing the umpires! She loved babies and was in many weddings of family and friends. She attended showers, parties, receptions, and any social gathering to which she was invited. We considered hiding some due to her social calendar wearing us out!

She was predeceased by her parents and one brother, Buddy (William) and her niece Wendy. She is survived by 3 sisters, Ane-Elise Worthington, Susan (Millard)Bell, Sherry (Doug)Barnett, all of Lake Butler, 2 brothers Stewart Kirby Akers of Crystal River, and John Russell Akers III (Dorinda) of Old Town.
She is also survived by nieces and nephews Macee, Callie, Jake, Emily, Matthew, John, Victoria, Anna, Jesstin, Jessica, Miranda, Chuck, Jed, Doug, Ashley, and Ryan.
Aunts Althea NesSmith, Worthington Springs and Marie Lewis, Fleming Island.
Kitty(Kathryn) Joe Bennett of West Virginia.
Though the great-nieces and nephews and cousins are too numerous to name here, she would name them for anyone that had time to listen.
She is also survived by a loving community that she made family.

We will continue to celebrate our Sassy, Jewelry laden, manicured and pedicured Valentine Angel and the lessons of love she taught us.

Visitation will be at Archer Funeral Home in Lake Butler, Wednesday, February 5, from 6 - 8:00 PM.
Services will be at The Church of Jesus Christ of Latterday Saints Lake Butler Ward on Thursday, February 6, at 10:00 AM. Her interment will follow at Oak Grove Cemetery.

Kristin's arrangements are under the care and direction of Archer Funeral Home. 386-496-2008. www.archerfuneralhome.com

To order memorial trees or send flowers to the family in memory of Kristin Marie Akers, please visit our flower store.