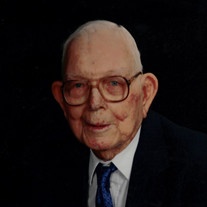 Kenneth Mobley Clyatt, 95, of Lake Butler, FL, went to be with the Lord on Thursday, September 4, 2014, at Baya Pointe Nursing and Rehab Center, Lake City, FL. Mr. Clyatt was born on February 10, 1919, the fourth son of the late Dudley and Ada (Reaves) Clyatt. He was a lifelong resident of Union County, Florida. He married the love of his life, Alethea (Dukes) Clyatt on May 21, 1937. They were blessed with 77 years of marriage and four children. Mr. Clyatt was a part of Harmony Free Will Baptist Church his entire life, becoming a member, together with his wife, in 1938. He served the church he loved, and faithfully attended, as Clerk, Member of the Board of Trustees, Building Committee Member, Member of the Board of Deacons, and Deacon Emeritus over the years. He was employed by, and retired from, Clay Electric Cooperation, Inc. after 31 years. He served on the Union County School Board from 1963-1967, representing district three, having been elected in November of 1962. He served his country in the United States Army from 1943 to 1946. During WW II he was stationed in Guadalcanal of the South Pacific. Mr. Clyatt was a member of the Lake Butler Masonic Lodge #52, Free and Accepted Mason, for 67 years. As a Mason he served as Worshipful Master and District Deputy Grand Master. He enjoyed fishing, gardening, and traveling, with his wife, especially during their retirement years. Family and friends enjoyed the generous gifts of sweet corn, peas, peanuts and other vegetables from his garden. He enjoyed spending time with, and showing his love for, his grandchildren. He was preceded in death by his parents; four brothers, Robert, Raymond, Lindsey, and Harold; daughter Verrell Clyatt Martin; son Elmo Kerwin Clyatt; and grandson Charles "Chuck" William Martin.

Funeral Services for Mr. Clyatt will be held Sunday, September 7, 2014 at 2:00pm at Harmony Free Will Baptist Church, with his son Rev. Larry Clyatt and nephew Bobby Clyatt officiating. Burial will be follow at Elzey Chapel Cemetery. Family invites friends for visitation on Saturday, September 6, 2014 from 5:00 to 8:00pm at the church. The arrangements are under the care of Archer Funeral Home, Lake Butler, Fla. 386-496-2008

To order memorial trees or send flowers to the family in memory of Kenneth M Clyatt, please visit our flower store.