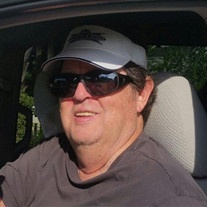 John Hearn Lewis, 70, passed away peacefully in Pensacola, Florida, on Tuesday, December 6, 2016. He was born on February 5, 1946, in Macon, Georgia to the late W.B. Lewis, Sr. and Pauline Coffman Lewis, and grew up in Raiford and Jasper, Florida. He attended schools in Union and Hamilton Counties and graduated in 1963 from Jasper High School. John was also a graduate of the University of West Florida where he earned a Bachelors and Master's Degree in Business Administration.
John worked with his father at Lewis Lumber Company in the sawmill business and later in the cattle business in Raiford. He was the owner and operator of a retail business in Gulf Breeze, Florida. He was a lifelong member of Lake Butler First United Methodist Church.
He was preceded in death by his parents, his sisters, Dorothy Sue Lewis, Vivian Allen Cash, Martha Marie Lewis and his brother W.B. (Bucky) Lewis, Jr.
John is survived by his wife, the former Sara Sue Driggers. They were married for thirty-one years and resided at Pensacola Beach, Florida. He is also survived by his brother Paul L. Lewis, Sr., (Carol), his sister Beverly Lewis Breckenridge, all of Raiford, Florida, and many nieces and nephews.
Services for John will be held at Lake Butler First United Methodist Church on Saturday, December 10th at 2:00pm, a visitation will be held one hour prior to service beginning at 1:00pm. Interment will follow at Dekle Cemetery in Lake Butler. Arrangements are under the care of Archer Funeral Home in Lake Butler. 386-496-2008.

To order memorial trees or send flowers to the family in memory of John Hearn Lewis, please visit our flower store.