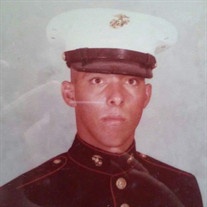 Mr. John Henry Knight, 58 of Brooker passed away peacefully at the VA hospital in Gainesville on January 20, 2017. Mr. Knight was born in Starke, Florida on July 27, 1958 to the late James Durant and Geraldine McNeal Knight. John was preceded in death by his parents and three brothers Roy Knight, David Knight and Andrew "Jack" Knight.
Mr. Knight enjoyed spending time with family and watching T.V. especially football when the Florida Gators were playing. He was a member of the United States Marine Corp. and was a truck driver by trade. He was a member of the Church of Jesus Christ of Latter Day Saints Starke Ward.
John was survived by:
His Daughter: Donna Knight
His Sons: John Knight Jr., James Knight, John Harold Knight and Zachary Knight
His Eight Grandchildren and many other family members and great friends.
Services for Mr. Knight will take place on Wednesday January 25, 2017 at 11:00 am at the Archer Memorial Chapel with a visitation being held on Tuesday, January 24, 2017 from 5to7 pm at Archer Funeral Home in Lake Butler. Arrangements are under the care of Archer Funeral Home 386-496-2008

To order memorial trees or send flowers to the family in memory of John Henry Knight, please visit our flower store.