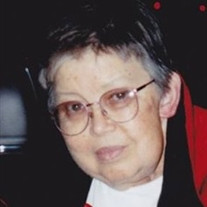 Joan Malinda Holt, 73 of Lake Butler passed away Sunday, April 13, 2014 at ET York Haven Hospice in Gainesville. Mrs. Holt was born August 18, 1940 at Lake Shore Hospital to the late Howard and Isabel Banks Mann. She has lived most of her life in Lake Butler moving away to Gilchrist County where she worked as a CNA at the Medic Ayers Nursing Home until she returned to Union County 17 years ago. Mrs. Holt was a member of the First Untied Methodist Church in Lake Butler and also volunteered at the S.R.E.C. She was preceded in death by her husband Thomas A. Holt, Sr.

Funeral Services for Mrs. Holt will be held Wednesday, April 16, 2014 at 11:00 A.M. in the First United Methodist Church in Lake Butler with Pastor Dan Search officiating. Burial will follow at Elzey Chapel Cemetery. Family invites friends for visitation Tuesday, April 15, 2014 from 6:00 to 8:00 pm. Archer Funeral Home is in charge of the arrangements. 386-496-2008

To order memorial trees or send flowers to the family in memory of Joan Malinda Holt, please visit our flower store.