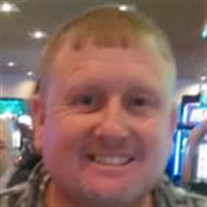 James H. Clark, "Greasy" 43 of Glen St. Mary, Florida passed away on December 6, 2016 at Ed Fraser memorial hospital with his family by his side. He was born in Gainesville to Herbert & Alice Clark. James was a heavy equipment operator.
James was an avid Florida State football fan, he also enjoyed fishing and spending time with his friends and family.
James is survived by:
His parents: Herbert & Alice Clark
His companion: MaryCarol Covington
His Daughters: Stacie Bridges, Meagan Conners, Rachael Clark & Jamie Clark
His Sisters: Amanda Bryant & Heather Cope
His Brother: Dewayne Small
His nephews: Bensen Roberts, Joshua Cope & Julianna Cope
His Three Grandsons

Services for James will be held on Friday, December 9, 2016 at 11:00 am at the Archer Memorial Chapel. A visitation will be held one hour prior to the service beginning at 10:00 am. Burial will follow at Brown Cemetery. Arrangements are under the care of Archer Funeral Home.

"It Ain't Easy Being Greasy"

To order memorial trees or send flowers to the family in memory of James "Greasy" Clark, please visit our flower store.
Send a Sympathy Card