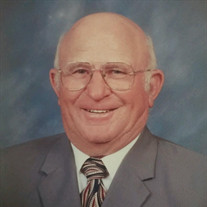 Henry James Williams, 87 of Worthington Springs passed away on April 6, 2018. He was born on January 10, 1931 in Union County, Florida, being a lifelong resident of the county. He was born to the late Joseph and Katie Roberts Williams. He was a 1950 graduate of Union County High School, where he was an all-conference football player. He was honored in 2011 by being one of the inaugural inductees to the Union County High School Hall of Fame. Mr. Williams proudly served his country in the Unites States Air Force. He retired in 1992 from Florida Gas after 32 years of "shift work". Mr. Williams was a member of Sardis Baptist Church.
Henry's passion was farming and "his" cows. He was locally well known for his sweet corn and collard green crops. He enjoyed Union County High Football and Florida Gator Football; where he was a season ticket holder for over 30 years.

To order memorial trees or send flowers to the family in memory of Henry James Williams, please visit our flower store.
Send a Sympathy Card