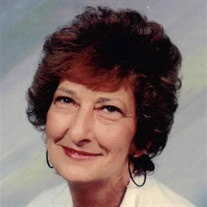 Helen Sue Ennis, 66 of Lake Butler passed away Sunday, August 24, 2014 at Suwannee Valley Care Center in Lake City. Mrs. Ennis was born in Pittsburg, Kentucky on November 10, 1947 to the late Earl and Geraldine Vanover Johnson. Mrs. Ennis graduated from Eastern Kentucky University with Top Honors. She also worked with the mentally handicap and homeless for many years. The most important thing to Mrs. Ennis was the love she had for her family. She was preceded in death by her brothers Ronny Johnson and Jerry Johnson.

Funeral Service for Mrs. Ennis will be held Saturday, August 30, 2014 at 11:00 A.M. at Grace Christian Fellowship Baptist Church with Pastor Terry Elixson officiating. Burial will take place at a later day. Family invites friends for visitation Friday, August 29, 2014 from 6-8pm at Archer Funeral Home in Lake Butler. The arrangements are under the care of Archer Funeral Home. 386-496-2008

To order memorial trees or send flowers to the family in memory of Helen Ennis, please visit our flower store.