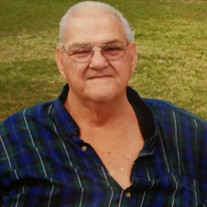 Harry Winfield Rehberg, 77, of Starke, FL passed away on August 4, 2017. He was born March 16, 1940 to the late Robert and Bonnie Rehberg in Thomasville, Georgia. Harry enjoyed being outdoors, he especially enjoyed hunting. He was a member of Bayless Highway Baptist Church. Harry is preceded in death by his beloved wife of 48 years, Doris Marie Rehberg. He is preceded in death by two brothers and two sisters; Ellis Rehberg, Wayne Rehberg, Carolyn Phelps, and Emily Henley. Harry's precious memory will be cherished by his family.
Harry Rehberg is survived by his four sons; Bobby Rehberg(Angie) of Starke, FL, Bruce Rehberg of Melborne, FL, Billy Rehberg(Lorrie) of Starke, FL, and Brady Rehberg also of Starke FL. He is also survived by 11 grandchildren and 9 great grandchildren.

To order memorial trees or send flowers to the family in memory of Harry Winfield Rehberg, please visit our flower store.
Send a Sympathy Card