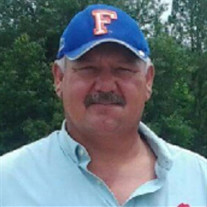 Harliss Marty Waldron 50, of Raiford, Florida passed away on Saturday June 25, 2016 of natural causes. Marty was born on September 17, 1965. He was a beloved son, brother, father and friend. He was an avid hunter and fisherman. He was an excellent carpenter and gardener. He is preceded in death by his grandparents Robert and Ruby Waldron, Edward and Georgia Thornton as well as infant child Crystal Waldron. He is survived by his parents Geraldine Waldron of Raiford and Hogan and Norma Waldron of Douglas, Georgia, His Brother Avery Waldron of Hampton, Stepbrother Tom (April) Wooten of Douglas, Georgia, Stepsisters Charlene (Mike) Moore of Alma, Georgia, Regina Wooten and Denise (Bryan) Waldron of Douglas, Georgia. He leaves behind two children Danielle and Kaley Waldron of Glen St. Mary. He has numerous uncles, aunts, cousins, and friends who mourn the loss of such a great person.
Funeral Services for Marty will be on Wednesday, June 29, 2016 at 10:00 am in the Archer Memorial Chapel with Rev. Larry Thornton officiating, a visitation will take place on Tuesday June 28th from 6-8 pm at the Archer Funeral Home. Arrangements are under the care of Archer Funeral Home in Lake Butler. 386-496-2008

To order memorial trees or send flowers to the family in memory of Harliss Marty Waldron, please visit our flower store.
Send a Sympathy Card