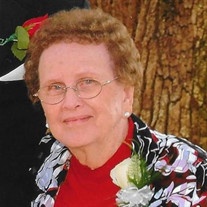 Gwendolyn Steedley Hewett 84 of Starke passed away On October 1, 2016 at the ET York Haven Hospice in Gainesville with her family at her side. She was born in Manor Georgia to the late Mose Steedley and Elizabeth Henderson Steedley. She was preceded in death by her husband Arthur Hewett , 2 sons, Steve and Michael Hewett and brother George H. Steedley. Mrs Gwendolyn was a seamstress, she enjoyed family and friends, cooking and sewing. She was a member of the Heilbronn Springs Baptist Church.
She is survived by her daughter: Jane (Lamar) Clemons of Starke
Daughter-in-law: Jackie Hewett Bennett of Lake Butler
Brother: Billy H. (Carol) Steedley
Sister: Evelyn Lynn of Manor, Georgia
10 Grandchildren
30 Great Grandchildren
2 Great Great Children
Funeral services will be held Tuesday October 4, 2016 at the Heilbronn Springs Baptist church at 11:00 am with visitation being held one hour prior to service (10:00am) at the church, burial will follow at the Conner Cemetery in Raiford. Arrangements are under the care of Archer Funeral Home.496-2008.

To order memorial trees or send flowers to the family in memory of Gwendolyn Steedley Hewett, please visit our flower store.
Send a Sympathy Card