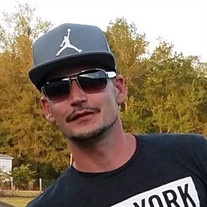 Glenn Andrew Griffis, affectionally known by friends and family as "Drew" left this world unexpectantly on October 5th leaving behind a host of family and friends.

Drew was born August 20, 1985 in Gainesville, Florida. He is preceded in death by his grandparents; Narcie and Vincent McKinney, Carol and Warren Hall, Jim Tucker, Junior Griffis and Granny Hattie Cross, his son; Jace Griffis and his baby sister Brandi Lynn Hall.

Drew was a construction worker for Eddie Davis, where he done amazing work as a framer, painter or anything he set his mind to. He loved with all his heart and his son Jayden was his life. He loved his mama and even had a tattoo on his stomach stating"mama tried" and a picture of his fiance' and son on his side. The last text his mama received was, " I love you so very much mama and 'YOU' are still my queen of hearts. His daddy would lovingly call him "Action Jackson" because he couldnt sit still and could throw a football like a pro. Drew and his sister Brandi jokingly said to each other "Ride or Die Babe...they are in Heaven together now. He wanted his big Brother Jamie to know he looked up to him, even though he was taller and actually had to look down to him and He always wanted Brandon to know he was proud of his bubba.

Drew was named after his father Glenn and his uncle David McKinney. He always looked up to his Uncle John. He loved with all his heart and wanted to be loved back and accepted in spite of his differences. He was anxiously awaiting tha arrival of his son, Nehemiah Joel(Nemo)due in Jan. One thing he never forgot was Uncle Charles address where he could get food, something to drink or gas money. he will be missed by all who loved him very much. RIP Drew

To order memorial trees or send flowers to the family in memory of Glenn Andrew Griffis, please visit our flower store.