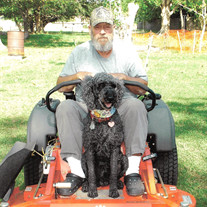 Gerald Couts went home to be with the Lord on Saturday, November 8, 2014. He was 70 years old. He is predeceased by his parents, Jeane & Willis Couts of Dayton, Ohio. Jerry was a Boy Scout leader and counselor in Pinellas County for about 20 years. He served in the Army/Army National Guard for 20 years before retiring in 1997. He was Worshipful Master in 2012 at Lake Butler Lodge 52 and a Brother at Mason Lodge 78 in Largo, Florida.
Jerry is survived by his wife, Norma Couts, sons Alex and Aaron Cannon, and grandchildren Caleb and Skyler Cannon.
Jerry with his service dog Beaugy volunteered at the Lake City VA every Wednesday and visited patients at the Lake Butler Hospital every week. He was a member of the Lake City ham radio club, was a member of M.A.R.S., and participated in the Columbia County emergency operations center training sessions. Jerry was a warrior for Christ everywhere.

To order memorial trees or send flowers to the family in memory of Gerald Couts, please visit our flower store.