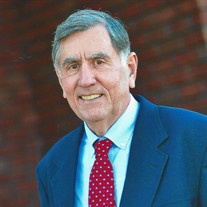 Fred Cunningham, Jr. of Lake Butler, Florida passed away on June 19, 2016 after a sudden illness at Shands Hospital, Gainesville, Florida surrounded by his family.

He was the son of Fred and Christine Cunningham and born in Harlan, Kentucky on February 18, 1943. He graduated from Union County High School in 1961. Served in the U.S. Navy from August 1960 to February 17, 1964. Had a 37 year career with the Department of Corrections, retiring as colonel at RMC in Lake Butler. Married Jackie Parrish of Lake Butler, Florida on January 1, 1963. He was a member of First Christian Church, past deacon, trustee and treasurer, Lake Butler Lodge #52 Free & Accepted Masons, Union County Quarterback Club, past president past board of directors at Union County Housing Authority. He is preceded in death by his brothers; James "Cotton", Hollis, Bill, Frank and his sister Marie.

To order memorial trees or send flowers to the family in memory of Fred Cunningham, Jr, please visit our flower store.