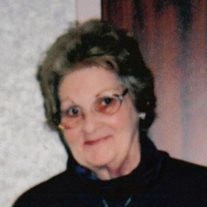 Evelyn Joyce Bright, 72 of Lake Butler passed away Thursday, February 27, 2014 at Shands at UF. Mrs. Bright was born March 2, 1941 in Brighton, Tennessee to the late Roy L. and Effie Smith Hopkins. She retired as a medical record specialist from the Florida Department of Corrections. She was also a member of the Faith Baptist Church. She is preceded in death by one brother and one sister.

Funeral Services for Mrs. Bright will be held Tuesday, March 4, 2014 at 11:00 am at the Faith Baptist Church in Lake Butler, with Bro. Ralph Durham officiating. Burial will take place at Mckinney Cemetery. Family would like to invite friends for visitation Monday, March 3, 2014 from 6-8pm at Archer Funeral Home. Archer Funeral Home is in charge of the arrangements. 386-496-2008. Please sign the guestbook at archerfuneralhome.com

To order memorial trees or send flowers to the family in memory of Evelyn Joyce Bright, please visit our flower store.
Send a Sympathy Card