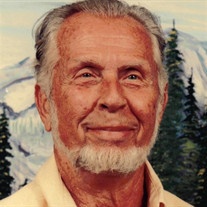 Eugene Beck Sr. 97, of Lake Butler passed away Sunday, January 18, 2015 at Suwannee Valley Care Center Haven Hospice in Lake City. He was born on October 21, 1917 in McPherson, Kansas to the late John Beck and Agnes Finkle. Mr. Beck was a purchasing agent with the City of Wachula. He served in the U.S. Army Air Corp. He was a member of The Church of Jesus Christ of Latter Day Saints, Lake Butler Ward. He was also a member of the Hardee Masonic Lodge number 17 Mr. Beck is preceded in death by his son Eugene Beck Jr.

Funeral Services for Mr. Beck will be held Wednesday, January 21, 2015 at Archer Memorial Chapel at 11:00 AM with Bishop Paul Waters officiating. Burial will take place following funeral services at Oak Grove Cemetery. Family invites friends for a visitation Tuesday, January 20, 2015 from 6 to 8 PM at Archer Funeral Home. The arrangements are under the care of Archer Funeral Home, Lake Butler. 386-496-2008

To order memorial trees or send flowers to the family in memory of Eugene Beck, please visit our flower store.