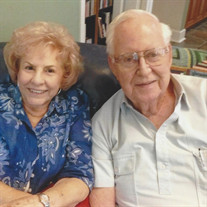 Elida was born in Tampa, Florida into a large family of 12 brothers and sisters. She and Norman met at a sewing factory in Tampa where she was a supervisor.  After marrying, they moved to Lake Butler, Florida in 1959 and began the construction of their first apparel manufacturing plant known as Lake Butler Apparel Company.  She was the heart and soul of the family business as it grew to over 750 employees and three locations.   She loved Lake Butler and the small community she called home.  She was a member of the First Christian Church of Lake Butler where she had many friends.

Elida was a devoted matriarch and caretaker to her family. There was nothing she enjoyed more than quality time during family gatherings and cooking for those she loved.  She leaves a powerful legacy of service, love, and family values to each generation she has touched.  Those who were lucky enough to call her “Nena” will carry her in their hearts and continue to pass down her legacy for generations to come.  She will never be forgotten.

Her funeral services will be held on Saturday, August 22, 2020 at 10:30 AM at First Christian Church for immediate family only.  Ministers Art Peterson and Shane Collins will officiate the service.  The services will be live streamed on Facebook through Archer Funeral Home’s Facebook page as well as First Christian Church’s Facebook page for those who would like to attend virtually.  Arrangements are under the care of Archer Funeral Home in Lake Butler. 386-496-2008.

To order memorial trees or send flowers to the family in memory of Elida Stephenson, please visit our flower store.
Send a Sympathy Card