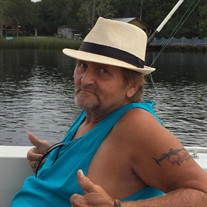 Earl Dwayne "Wayne" Davis, 52 of Starke, Florida went to be with the Lord on January 22, 2018. Wayne's loving family was gathered by his side at the time of his passing. He was born in Moultrie, GA to the late George Trull and Ruby Hines. Outside of working, Wayne thoroughly enjoyed fishing and spending time with his family, especially his grandchildren. Wayne was preceded in death by his father, George Trull; mother, Ruby Hines; fraternal grandparents and maternal grandparents; along with several aunts and uncles.
Wayne is survived by: his loving partner, Candace Dent of Starke, FL; brothers, Larry (Marcia) Davis of Starke, George Davis of Moultrie, GA; sister, Teresa Sanchez of Pensacola, FL; son, Dalton Davis of Moultrie, GA; Daughters, Brenda (DJ) Hurst of Doerun, GA, Casey Jones of Moultrie, GA; stepchildren, Robbie (Jessica) Godwin of Starke, FL; Joshua (Adrianna) Godwin of Starke, FL, Danielle Dent of Starke, FL and Jacob Dent of Starke, FL; 9 nieces and nephews and 14 grandchildren.
Family is asking in lieu of flowers that donations be made to either the Haven Hospice House or American Cancer Society.

To order memorial trees or send flowers to the family in memory of Earl Dwayne "Wayne" Davis, please visit our flower store.
Send a Sympathy Card