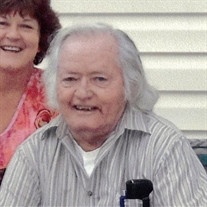 Doyal Powell Roberts, 78 of Brooker passed away peacefully Saturday, July 19, 2014 at North Florida Regional Medical Center in Gainesville after an extended illness with his family by his side. He was born in the New River Section on Bradford County. He was the son of the Late Oscar and Myrtle Dukes Roberts. He was preceded in death by is wife Shirley Godwin Roberts. He was self employed.

To order memorial trees or send flowers to the family in memory of Doyal Powell Roberts, please visit our flower store.