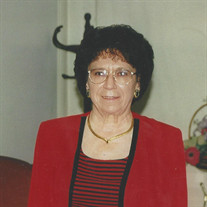 Mrs. Dorothy Marie Cason 89, of Lake City passed away peacefully October 12, 2016 at the ET York Haven Hospice in Gainesville after an extended illness with her children at her side. She was born in Brooklyn New York , living most of her life in Lake City and Starke. She was the Daughter of the late Phillip and Mary Agnes Horan. She was preceded in death by her husband Rob Cason, one brother and three sisters. She was a seamstress at Big Dads sewing factory in starke and a supervisor at the Sun State Sportswear in Lake City. She was a Catholic by faith.
She is survived by her daughters: Beverly (Richard) Westfall of Worthington Springs, Janice (Jerry) Freeman of Melbourne and Phyllis Crews of Worthington.
Sons: Wayne "Gis" (Deborah) Hollingsworth of Starke, Tommy (Betty) Hollingsworth of Starke and Tim Hollingsworth of Starke.
25 Grandchildren, 46 Great Grandchildren and 9 Great Great Grandchildren
Funeral Services will be held Saturday morning Oct. 15, 2016 at 11:00 AM at Archer Memorial Chapel with Rev. Jason Stephens officiating. Visitation will be held Friday evening October 14, 2016 from 6-8pm at Archer Funeral Home. Arrangements are under the care of Archer Funeral Home in Lake Butler. 386-496-2008

To order memorial trees or send flowers to the family in memory of Dorothy Marie Cason, please visit our flower store.
Send a Sympathy Card