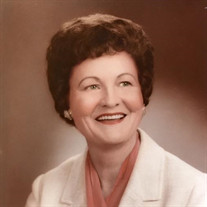 Deloris Bloodsworth Conner Civils, 97, of Raiford passed away peacefully June 28, 2016 at the ET York Haven Hospice in Gainesville, Fl., after a brief illness. She was born in Raiford, Fl. to the late Warren Bloodsworth and Elizabeth Norman Bloodsworth. She was preceded in death by the father of her children, K.D. Conner. Her daughter, Deanna Knight. Her son, Gerald Conner. Her brothers, Francis Bloodsworth, Wadeus Bloodsworth, Harold Bloodsworth, Eugene Bloodsworth. Deloris opened and operated Deloris' Beauty Shop since 1960 and she was still working until two weeks before her death. To know her was to love her. She was a member of the First Baptist Church of Raiford.
She is survived by her husband Wesley Civils. Her daughter, Hilda and husband J.R. McLeod of Raiford, Fl. Her sisters, Evelyn Goodman of Lake Butler, Carolyn Beasley (Edgar) of Lake Butler, Glenda Dobbs of Gainesville, and Gwendolyn Williams of Gainesville. Her brothers, Clifford (Lucille) Bloodsworth of Sarasota, Quentin (Eldis) Bloodsworth of Lake Butler, Sullivan (Beth) Bloodsworth of Hawthorne, Wayne (Betty) Bloodsworth of High Springs, her 8 Grandchildren, 12 Great Grandchildren and 3 great great grandchildren.
Funeral Services will be held Saturday, July 2, 2016 at 11:00 a.m. at the Fellowship Baptist Church in Raiford, Fl. A visitation will be held Friday, July 1, 2016 from 6:00 to 8:00 p.m. at the Archer Memorial Chapel. Arrangements are under the care of Archer Funeral Home in Lake Butler. 386-496-2008.

To order memorial trees or send flowers to the family in memory of Deloris Conner Civils, please visit our flower store.
Send a Sympathy Card