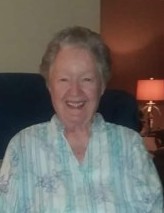 Darlene Young, 88, a resident of Waynesville, NC, passed away on August 11, 2021, after a courageous battle with cancer. Darlene was born in Aberdeen, Grays Harbor, WA, on November 14, 1932. She resided in Waynesville, NC since 2008. She was the daughter of Leonard Whitman Young and Dorothy Ida Hellman Young of Aberdeen, WA. During the Korean War she served in the US Air Force at Headquarters, Far East Air Force in Tokyo, Japan.

She was preceded in death by her parents and her Son, Raymond D. Massey, Jr.

Grandchildren, Shane Massey, Meashell Tomlinson, Georgia Hendricks, Samantha Massey and Stephanie Staier, all of Lake Butler, FL, and Brandon Massey and Breanna Massey who reside in OR and WA. She is also survived by 12 Great-grandchildren.

Elder Stephen Adler from her Church of Jesus Christ of Latter Day Saints, Waynesville, NC will officiate at her service.

To order memorial trees or send flowers to the family in memory of Darlene Massey, please visit our flower store.
Send a Sympathy Card