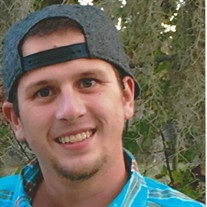 Daniel Thomas Jenkins II, 23, of Lake Butler, FL passed away suddenly on Thursday, January 26th, 2017. Daniel was born on July 5, 1993, grew up in Lake Butler, and graduated with the Union County High School class of 2012.
Daniel was preceded in death by his beloved "Papa," Ricky Jenkins.
Daniel is survived by his son, Daniel "Danny" Thomas Jenkins III, the love of his life, Courtney Personette (fiancé), parents: Daniel Jenkins (Lydia) and Laura Story Jenkins, sisters: Randa, Anaston, and Emma Jenkins, and grandparents: Mary Jenkins, and Mary Lou and Bob Story, nephew: Noah Robinson, and many aunts, uncles, and cousins.
Daniel was employed by his soon-to-be father-in-law, Jeff, with Jeff's Tire and Repair. He was a fan of NASCAR and FSU. In his spare time he enjoyed fishing, golfing, going to the beach and springs, and spending precious time with Courtney and Danny.
Graveside services will be held Tuesday, January 31, 2017 at 2:00 PM at Mt. Zion Cemetery. In lieu of flowers, a fund has been created for Daniel's son at CSB, Lake Butler.
Daniel will be greatly missed by his family and friends.

To order memorial trees or send flowers to the family in memory of Daniel Thomas Jenkins, please visit our flower store.