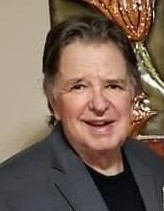 Mr. Curtis Edward Johnson, age 66, of Jacksonville, FL passed away last Friday, February 12, 2021 about 2:10pm at his daughter’s home. Curtis was born November 7, 1954 to Edward and Gloria Johnson of Clarkson, MI where he grew up. He earned his Masters Degree in Accounting from Walsh College in Michigan. In 1990, he was working as an accountant in Miami, FL when he fell in love with his wife, Gloria Cardona.  They married in 1991 in Tennessee. In 1997, Curtis and Gloria began their thriving produce stand business which they successfully worked until they moved to Jacksonville, FL to be close to their daughters and grandchildren in 2017. Curtis was a loving son, husband, father, grandfather, and brother who is loved and will be missed.

Curtis Edward Johnson is survived by his parents, Edward and Gloria; his wife, Gloria; their two daughters, Michelle and Alejandra Johnson; grandchildren, Sabrina, 7 and Sebastian, 3; his siblings, Cheryl, Jeff, Brent and Gary; and numerous nieces and nephews.

To order memorial trees or send flowers to the family in memory of Curtis Edward Johnson, please visit our flower store.
Send a Sympathy Card