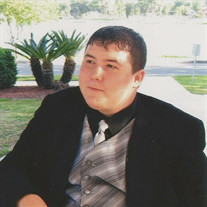 Corey Dean Abernathy 25, of Lake City passed away on Sunday February 21, 2016 at the Jacksonville Memorial Hospital with his Mother by his side. Corey was born on December 11, 1990 in Gainesville, Florida. He lived most of his life in Lake City, he graduated from Columbia High School in 2010. Corey was a highlight to any room that he came into, He enjoyed spending time with his family, working on graphic designs, listening to various types of music and loved his Cats.
He is survived by:
His mother: Deanna Abernathy
His mother's significant other: David Henneman "Not the Mama"
His significant other: Trent Aughenbaugh
Grandmother: Diane Bouknight
Great Grandmother: Hazel Norman
Uncle: James "Travis" Abernathy
Cousins: Jacqueline, James "Casey" and Orion
A Memorial Visitation to celebrate Corey's life will be held on Friday, March 4, 2016 at 2:00 pm in the Archer Memorial Chapel. We ask that everyone wears green on that day in honor of Corey. Arrangements are under the care of Archer Funeral Home. Lake Butler 386-496-2008

To order memorial trees or send flowers to the family in memory of Corey Dean Abernathy, please visit our flower store.
Send a Sympathy Card